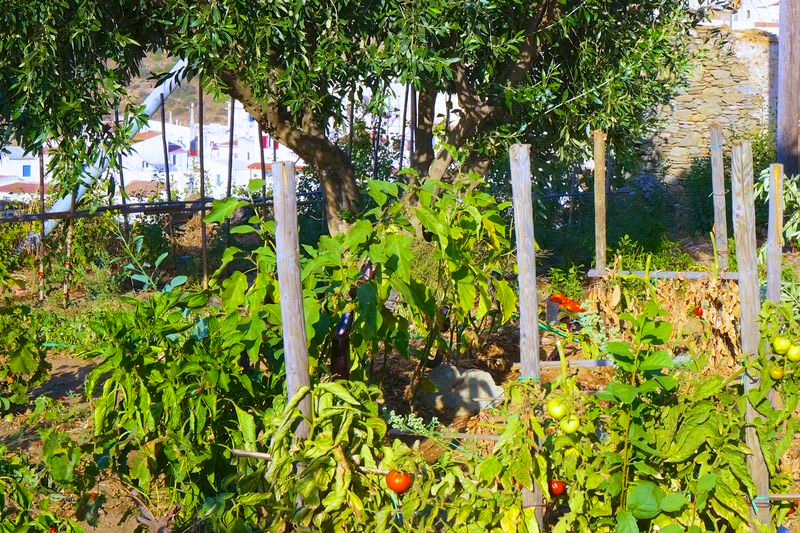 I’ve taken two cooking classes while we’ve been in Greece and they have both been excellent.  Last night, we had class in Kea, which turned out to be a private session at a beautiful villa near our rental apartment.  We started by touring the vegetable garden, which was at the peak of August beauty.  We used tomatoes and green peppers from this garden in our main dish and they were delicious.  After so many months away from my own little city garden, and weekends raiding my parents gardens in VT, I definitely miss getting my hands dirty.  I loved spending a few minutes inspecting their rows, eating some fresh cherry tomatoes, and discussing the growing season on the island.

First of all, we hollowed the vegetables in a way that preserved the tops to create little hats.  This is important since this recipe uses uncooked rice and you need the cover to create steam while cooking. This was pretty easy with the peppers (slice slightly lower on the pepper than you might ordinarily), but a bit trickier for the tomatoes. 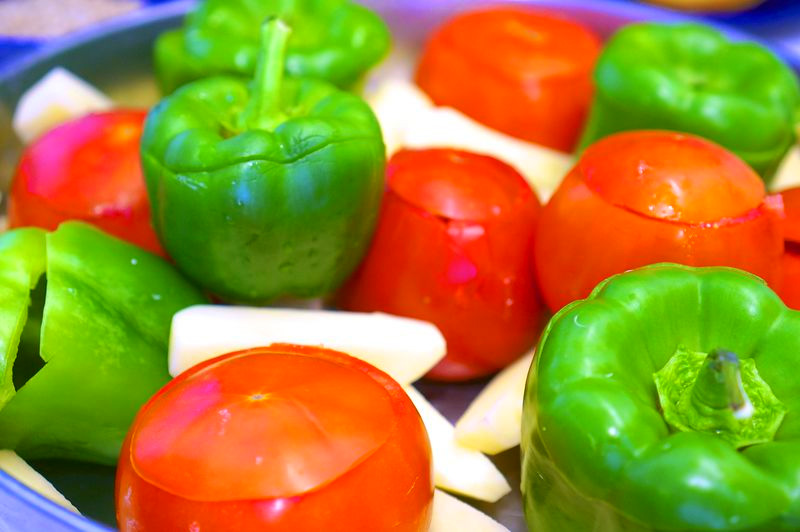 The best system is actually to cut the bottom off the tomato and leave the top with the stem in tact.  Use a large spoon to scoop out the inside of the tomato, being careful to leave enough to preserve the shape.  Save the tomato insides in a bowl as you scoop them out. 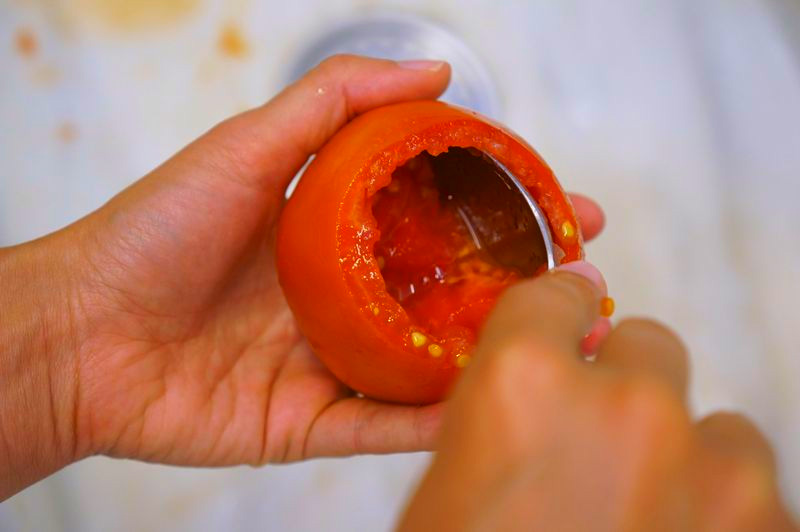 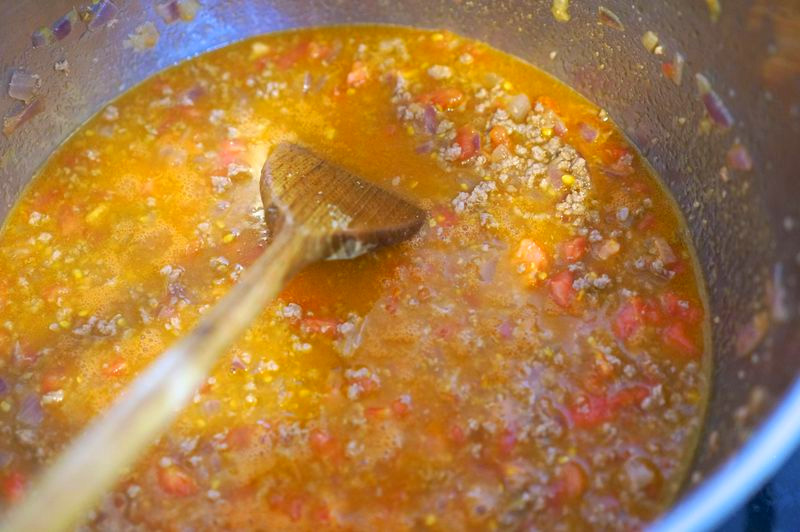 Saute the onions and ground meat with a splash of olive oil in a large pan.  Once it has browned (about five minutes), add the tomato flesh and juice you scooped out earlier, the uncooked rice, pine nuts, and spices. Mix everything together and cook for five minutes, until the rice has started to absorb the tomato juice. 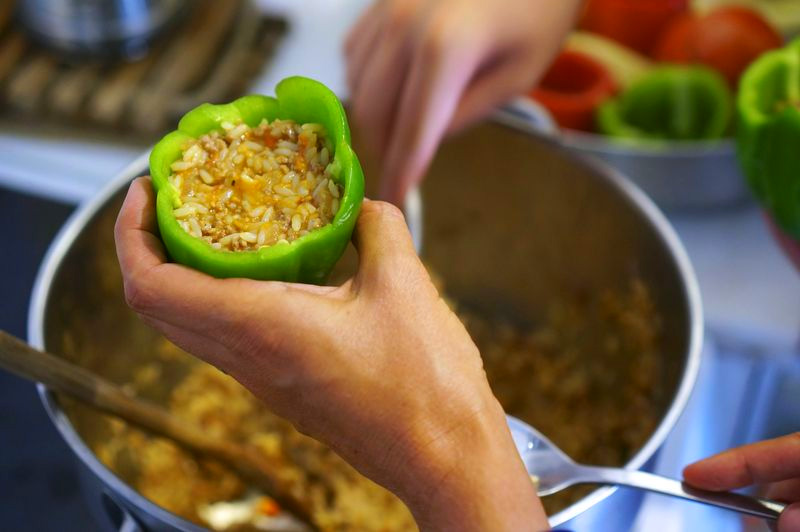 Fill each pepper and tomato with the rice/meat combo and then cover it with its matching hat.  Nestle the tomatoes and peppers among the potato spears in a large baking dish.  Scoop any remaining filling into the dish and distribute among the potatoes.  Cover everything with a drizzle of olive oil and pop it in the oven. 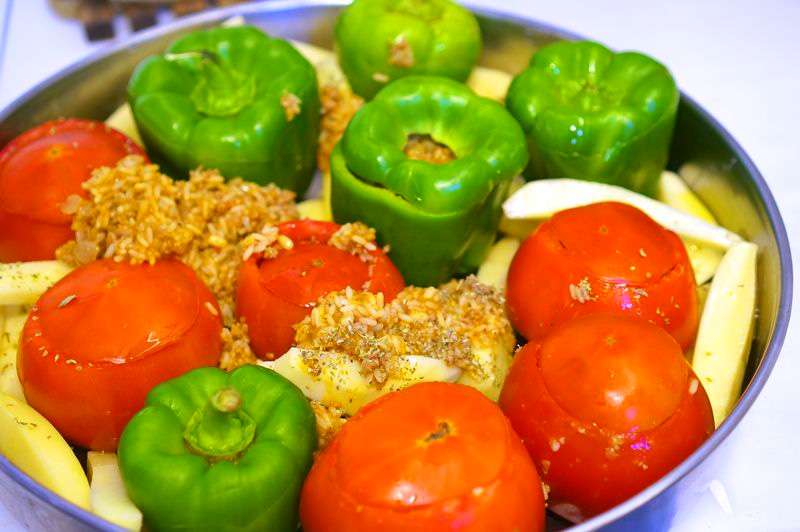 Bake at 400 degrees for 40 minutes, or until the tops of the tomatoes and peppers are nicely browned and the kitchen smells delicious.

While these were baking, we spent some time exploring the rest of the property.  Here is the view from the kitchen out onto the courtyard.  Pretty nice! 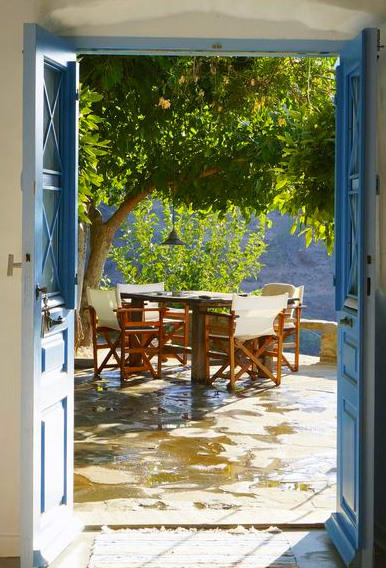 From the courtyard you have a beautiful view down over the village and out to the sea. 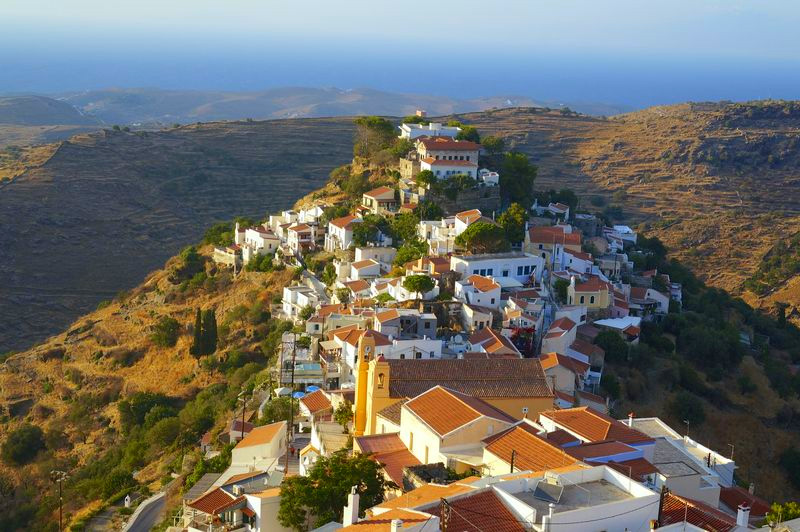 The tomatoes and peppers looked amazing when they came out of the oven.  We gave them about ten minutes to cool down before digging in.  As with many Greek dishes, you sprinkle a bit of dried oregano over the food right before eating.

As you know, I don’t eat much meat, but this was a dish worth making an exception.  If you’re a strict vegetarian or vegan simply omit the meat and make the filling with rice, tomatoes, pine nuts, and spices. 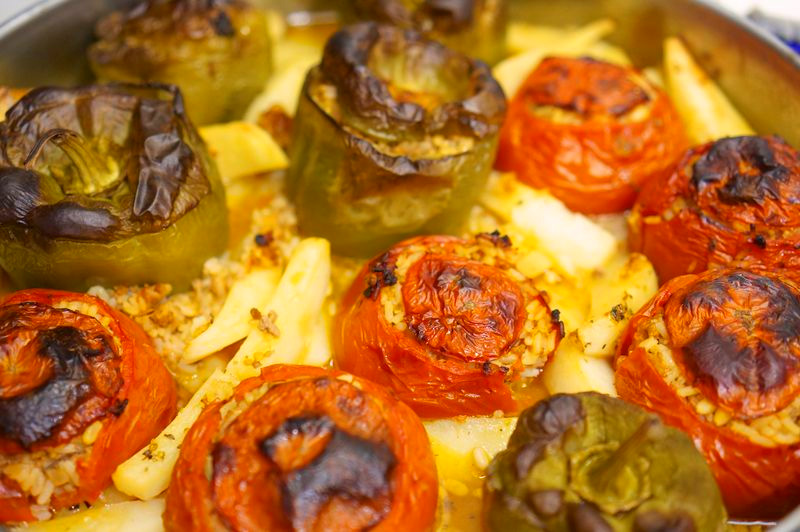 After dinner we ate fresh grapes grown on the property.  There is a lovely tradition in Greece of serving complimentary green grapes and watermelon after dinner in tavernas (usually also accompanied by a shot of ouzo).  It’s the perfect way to end a meal in my book (the fresh fruit, more than the ouzo!).  You leave with a sweet taste in your mouth, without feeling weighed down by a heavy sugary dessert. 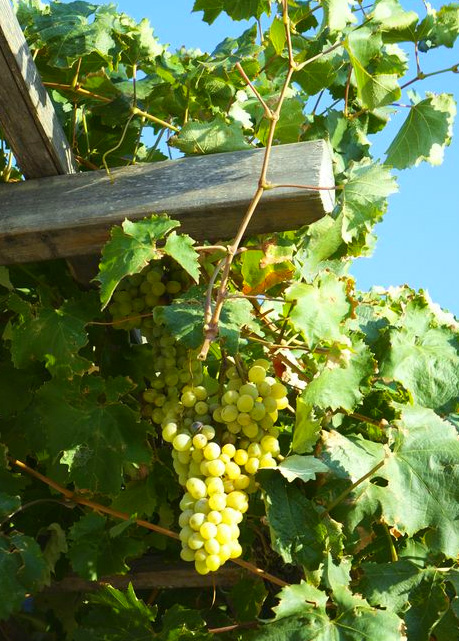