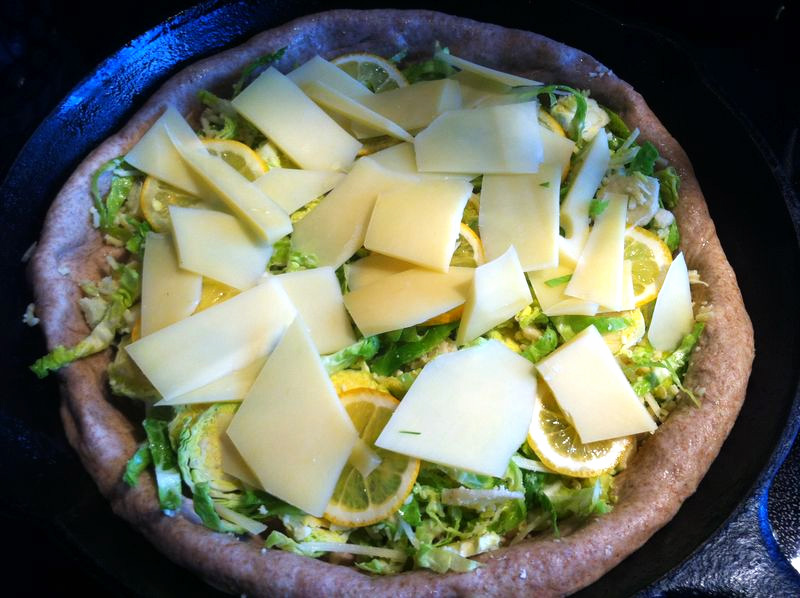 I was recently traveling in Sicily where it was all lemons, all the time.  We were surrounded by lemon trees laden with fruit, ate amazingly tart local lemons squeezed over fresh seafood, and came home sucking on lemon candies.  I loved it!

I felt inspired to keep up the lemon trend when back in Boston and luckily I was able to find some delicious Meyer lemons.  Meyer lemons are originally from China and are a hybrid between a traditional lemon and an orange.  They have a slightly sweeter taste and orangier exterior skin.   They are often used in baking, but since I’m not much of a baker I looked for a savory way to cook with them.

I decided to try making a pizza combining thinly sliced lemons, brussels sprouts, and fancy cheese (I saw something similar in a recent issue of Martha Stewart Living).  I combined the sliced brussels with 2 cloves of crushed garlic, olive oil, and shaved parmesan cheese.  I used this as the base layer of the pizza and then added a layer of thinly sliced lemons (including the skin).  Finally, I topped the whole thing off with slices of robusto cheese (a hard cheese from Holland with a salty and nutty flavor). 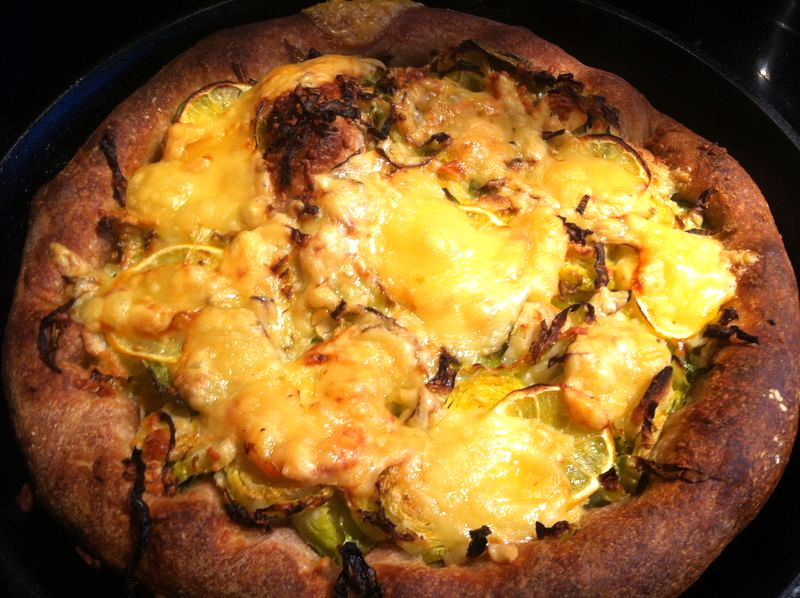 The pizza came out of the oven looking beautiful and tasting even better.  The heat slightly caramelized the lemons, which added sweetness to their flavor.

I tried a new cooking method with this pizza that I have since adopted for all pizzas.  I spread the crust out in an oiled cast iron pan (the largest one you have).  The dough covered the bottom and crept up the sides creating kind of a deep-dish style pizza.  I browned the bottom of the crust by cooking the pan on medium heat on the stove top for about 10 minutes before putting it into the oven.  Having those few minutes of heat right on the crust resulted in a beautifully browned bottom and crispy texture.  It was delicious!

Pizza gets a bad rap for being unhealthy.  Certainly there are many kinds of pizza that are definitely very unhealthy, but it’s also really easy to make your own pizzas that are full of healthful ingredients.  I always use whole wheat crust in my pizzas, which starts you off with a strong nutritional foundation.  Next I pack in the veggies through homemade sauces and lots of toppings.  I also pick my cheeses carefully – often using cheeses with stronger flavors so I don’t have to use as much to get the same taste.  My favorites are goat cheese, sharp cheddar, parmesan, asiago, and robusto.  Happy pizza making!